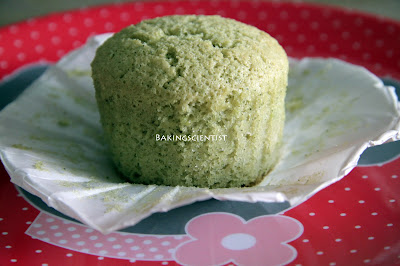 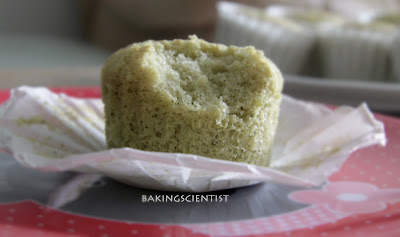 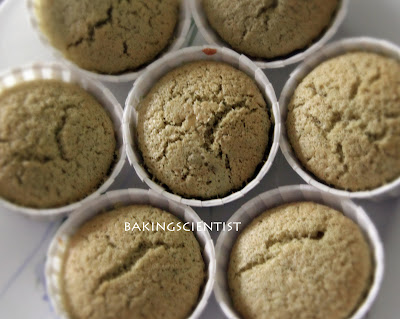 As my obsession *haha* for sponge cupcake continues, finally I managed to get the Matcha powder from Isetan Supermarket at Orchard yesterday. Actually I did another boo-boo today while baking this Matcha Sponge Cupcake this morning - I poured the melted butter & milk mixture into the beaten egg & sugar mixture, then I realized I should have added the flour first!! The egg mixture was deflated. I was at a lost on what to do, but went ahead to add the flour, but I could see that there are lots of traces of flour no matter how much I fold into the mixture. There are also lots of bubbles on the surface of the mixture. After baking, the cupcakes, as expected, did not rise much :| The cake was dense. Totally not spongecake. I was depressed for a few minutes.

Then I decided to try baking the Matcha Chiffon Cupcake. Shortly after, I changed my mind again - instead of wondering what caused the dense texture of the cupcakes (is it due to the wrong order of steps I took? or is it the Matcha powder?), the only way to verify is to bake the same thing again!

I was glad I did :D I followed the steps correctly this time, and when I took the first bite of the Matcha Sponge Cupcake, I was satisfied - it was soft and spongy, somehow the sweet tops remind me of the cotton candy I ate as a kid :)

Really love this book written by Odagawa Sanae, the texture of the sponge cupcake is soft and fluffy, and I've received positive feedback from my nieces :) I am thankful to Sanae-san for sharing her knowledge :)

The method is the same as Sponge Cupcake, in step #4, sift the Matcha powder together with flour. 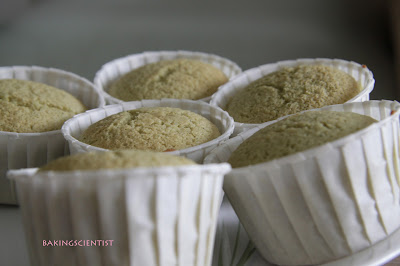 There is a Chinese saying ”在哪里跌倒，就在哪里爬起来“. I found that very applicable to me in this situation. In English, it literally means "Get up from exactly where you fell down". In that way, you would have learned how to deal with the same situation in a better way. And will not be afraid to attempt that problem again. Sounds confusing? Haha I guess I am getting a bit philosophical, pardon me for not being able to explain better :p

I am already thinking what else can I bake with the Matcha powder :) It expires in end August and I must use it before that!

I will be submitting this to Aspiring Bakers #30: it's Tea time! (April 2013) hosted by Food Playground. 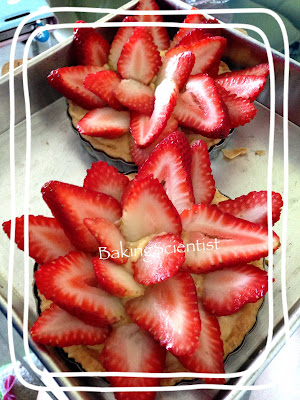 I've always like the fruits tart at Delifrance :) The crust is the best - crunchy :) I've been staring at tart recipes for some time, but did not have the courage to do it cos there are so many steps. I have never make custard before, neither have I bake a tart :p so I was also apprehensive about the outcome. Finally, 2 days ago, I gathered enough courage to bake strawberry tarts after finally purchasing 2 11cm diameter removable bottom tart pan :p